Located on a small expansion shelf about midway between the Third and Fourth Circles, Musical Hell is presided over by Diva, a minor demon charged with passing judgement on the worst musicals ever committed to film. (She still hasn't figured out if this is their punishment or hers.) Take a seat on the bench and have your earplugs ready, because court is now in session.
New videos posted on the first Monday of the month. Other viewpoints, news, and general ramblings posted when they crop up.

Five Movie Musicals That Need to be Remade

Earlier this month, it was announced that Glee and Spider-Man: Turn Off the Dark alumnus Roberto Aguirre-Sacasa is negotiating to write a remake of Little Shop of Horrors starring Joseph Gordon-Levitt as Seymour. I can't say this news fills me with boundless enthusiasm. True, the 1986 film directed by Frank Oz has its faults—most notably the tacked-on, focus group-approved ending—but it's one of the better movie musicals out there, especially since it came out of an era when very few quality live-action musicals were being made. Could anyone—even a fine actor such as Gordon-Levitt—match Rick Moranis' perfectly nerdy Seymour? Or the gleeful sadism of Steve Martin's dentist? I don't even want to think about the pop stars that might be tapped to voice Audrey II (Cee Lo Green? *shudder*).

Alas, Little Shop's popularity and nostalgia factor make it a prime remake target by Hollywood standards. But what about the musicals that didn't get it right the first time around? The ones that had the highest of Broadway pedigrees, but suffered on film from bad casts, incompetent rewrites, and clumsy direction. They deserved better; why not take another crack at them for a change? Leave the denizens of Mushnik's Flower Shop alone—here are five musicals that really need someone to come in and make them over: 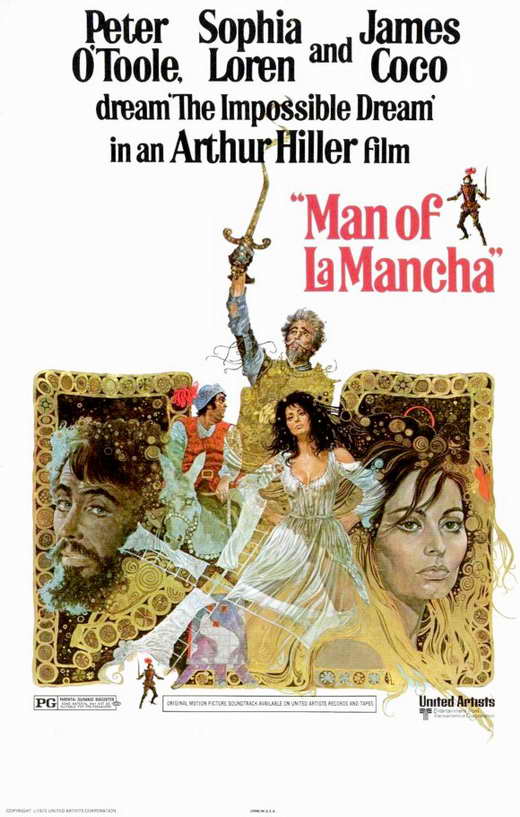 What Went Wrong: One of the classic examples of casting big-name film stars in a musical they have no business being in, Man of La Mancha features the woefully miscast Peter O'Toole and Sophia Loren slogging their way through the story of mad knight Don Quixote and struggling with a score neither of them is prepared to manage. (O'Toole used a voice double, but this didn't help any, especially when paired with his embarrassing attempt at lip synching.)
Why It Deserves a Second Chance: Man of La Mancha has some wonderfully soaring songs (particularly Quixote's “Duclinea” and “The Impossible Dream”)--it would be a joy to see them in a movie that does them justice. And while the theme of fighting for justice in a profoundly unjust world might not be what Cervantes had in mind when he first penned his satire of chivalry, it's still a good message to send to an increasingly cynical world. 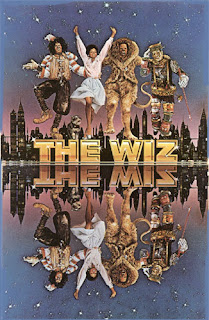 What Went Wrong: Man of La Mancha has actors who can't sing; The Wiz has the inverse problem: singers who can't act. Diana Ross and Michael Jackson are icons of popular music with very good reason, but it's embarrassing to watch them try to perform when the music stops (particularly Ross, who turns Dorothy into an unsympathetic whiner). Director Sidney Lumlet and screenwriters William F. Brown and Joel Schumacher don't help either, creating a poorly paced, heavy-handed story filled with broad stereotypes.
Why It Deserves a Second Chance: The Wizard of Oz is one of those stories that can stand up to numerous revisions—as proven by everyone from the Muppets to Gregory Maguire—and the idea of an all-black retelling using New York City as the model for Oz is a good one that can be interpreted well. The stage musical hews pretty close to the original L. Frank Baum novel, which would make it stand apart from the classic MGM film. What Went Wrong: What is on stage one of the most perfect musicals ever created became merely mediocre thanks to Richard Attenborough's uninspired direction and indifferent vocal performances to an over-synthesized orchestration of the score. The screenplay puts too much emphasis on the Zach/Cassie relationship, shortchanging several other characters and undermining the basic theme of the extraordinary lives of ordinary people. “They're all special!” Cassie declares of her fellow auditionees—but apparently some are more special than others.
Why It Deserves a Second Chance: See above, re: one of the most perfect musicals ever created. What Went Wrong: Joel Schumacher and Andrew Lloyd Webber were so busy making sure Gerard Butler and Emmy Rossum looked pretty that they forgot to see if they sounded good. When you're telling the story of a repulsively hideous yet remarkably talented musician, this is an even bigger drawback than usual. The result is nice to look at but bland and emotionally uninvolving, like staring at a Harlequin Romance cover for two and a half hours.
Why It Deserves a Second Chance: Even more than most musicals, Phantom really needs a strong team behind it to overcome its inherent flaws. Given leads who can handle Lloyd Webber's sweeping score, and a director who can help them tap into the darkness and visceral passions lurking under the melodrama, it can be both lavish and moving. What Went Wrong: To his credit, Christopher Columbus did try to do right by Jonathan Larson's turn-of-the-millenium update of La Boheme. But the results are hit-and-miss due to the clumsy staging of several numbers and an original cast that's now a little too old to be dancing on tables and singing about sticking it to the Man. (Then again, Brittney Spears was mentioned for a major role at one point, so that may be the lesser of two evils.)
Why It Deserves a Second Chance: Rent has the makings of an energetic, inventive movie about it, but the director of Home Alone and Harry Potter is not the person to bring it out. It needs someone with a more stylized approach who's not afraid of the darker aspects of the story (including a girl who commits suicide when she discovers she's HIV-positive, a drug addicted stripper, and a veritable chorus of homeless people) to really make it sing.

Your turn: what movie musical really let you down, and you want to see done justice?
Posted by TheDiva at 12:54 PM

New comments are not allowed.

Heavenly Places on the Web